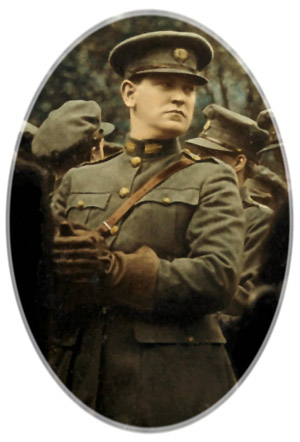 It was in October of 1922 that the Irish Army Council decided to organise a census of National Forces, to be undertaken at midnight spanning the 12th & 13th November of that year. Its purpose was “To ascertain the exact strength of the National Forces by location, for administrative, logistical and operational purposes.”

In the coming weeks, history lovers can view a full list of personnel in the Free State Army originally led by General Michael Collins is being currently launched on-line, on the website of the Defence Forces’ Military Archives.

When the site is complete, the full contents of Ireland’s first, and indeed only military census, which was compiled just months after General Collins was killed in 1922, will list the names of all those who served in the Irish National Army, during the Civil War.

The then National Army consisted of units of the IRA who had fought for independence from Britain. Their Commander in Chief was General Collins, who was also the Chairman of the new Provisional Government of the Irish Free State, which was scheduled to materialise in December 1922. However this expected transition to Irish independence was to be disrupted by the Irish Civil War, which began in June 1922. This new army would now split between those who supported the Treaty and the “Irregulars,” latter, those who opposed it.

Following his death in an ambush by ‘Irregulars,’ at Béal na mBláth, Cork in August 1922, General Michael Collins was replaced as head of the provisional government, between August to December 1922, by William Thomas Cosgrave. (Though it had the option to appoint General Richard Mulcahy, the pro-Treaty leadership decided on W. T. Cosgrave to succeed, in part due to his democratic credentials as a long-time serving politician.)

A sample on-line page listing named individuals in the barracks at Borrisoleigh, Thurles, Co Tipperary, can now be viewed by clicking Here

This entry was posted in History, Tourism. Bookmark the permalink.