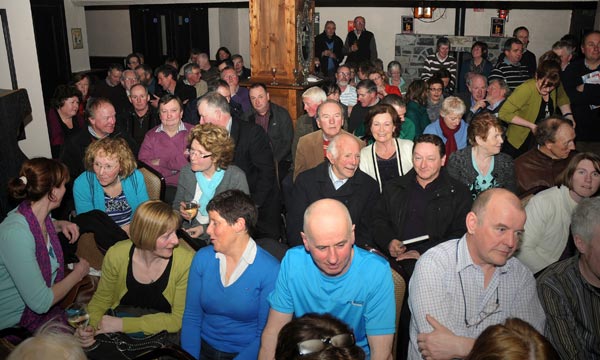 The latest publication, penned by Tipperary author John G. O’Dwyer, entitled “Pilgrim Paths in Ireland,” was launched last night in the Watermill, Thurles, before an overflow attendance representing hill-walkers, community organization and friends of the author from across County Tipperary and further afield. With standing room only for many of his audience, John G  presented a captivating slide show on his recent pilgrim journey showing real passion and a magnificent depth of understanding for Ireland’s wild and beautiful upland terrains. In vivid detail he described his journey from Slemish Mountain in the northeast of Ireland, where Christianity had its first dawning in Ireland, to Skellig Michael in the Southwest, where the known world was once believed to end.

Later in his keynote address, long time pilgrim walker, Fr Tomas O’Connell, who has competed the entire Camino Pilgrim Trail, spoke of the restless search for spirituality that continues right into the modern age and is now expressing itself, as increasing numbers return to walking the great medieval pilgrim paths. He also spoke of the wonderful descriptive writing that was such a feature of this new publication and stated that it would make readers immediately anxious to walk the trails described.

In launching the book, veteran hillwalker and radio broadcaster, Jim Finn spoke emotionally on the theme of giving and said John G and his wife Carmel had given so much that was valuable to all present and that with this new book the author was extending this giving, to all who loved the Irish countryside.

After the launch there was much favourable comment on how each pilgrim journey described, painted in words an entertaining and compelling narrative in itself. Throughout the book, the author carefully recounts, sometimes in humorous detail, his own personal experiences and feelings, as he completes each individual pilgrim route and the many idiosyncratic characters he encountered along the way.

Certainly it is a  publication that appears destined to  be quickly ‘snapped up,’ by organisations, clubs and  societies, anxious to raise charitable funding for worthwhile projects by organizing sponsored walks along these ancient routes, which through this book are now become accessible to all.

A founding member of Mid-Tipp Hill Walkers, John G. O’Dwyer has spent a quarter century leading, not just large groups through the Irish scenic uplands, but also mountain climbing groups in the UK, Europe and Africa. In 2012, John not only researched, he also   walked every step of the ancient pilgrim trails of Ireland and this experience has enabled him  to produce a comprehensive, readable and thoroughly entertaining guide to Ireland’s mystical trails, suitable for pilgrims, walkers, history lovers or those merely seeking an informative and most entertaining read.

Publication is available from all leading book stores.

This entry was posted in News, Tourism. Bookmark the permalink.