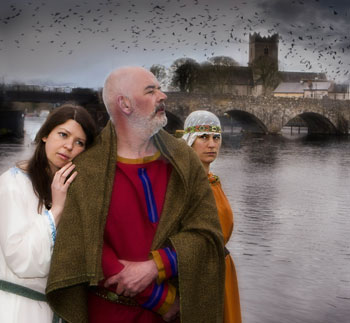 An all-island tourism delegation from counties Tipperary, Armagh, Clare and Dublin, latter areas with strong connections to the only undisputed High King of Ireland, Brian Ború, will embark on a promotional drive in the United States next week.

Coinciding with the millennial anniversary of Ború’s death at the Battle of Clontarf in 1014, National Brian Ború Programme representatives from Tipperary, Armagh, Clare and Dublin, will attend the annual Milwaukee Irish Fest in Wisconsin, where they will be seeking to attract some of the estimated 150,000 festival goers to Ireland.

Internationally, Brian Ború is celebrated for his contribution to uniting Ireland and quelling the destabilising impact of the Vikings. Born in Killaloe in East Clare, Brian Ború became the only undisputed High King of Ireland and today is regarded as the most significant figure in Irish history.

Ború is a central theme of this year’s Milwaukee Irish Fest from August 14th -17th. Established in 1981 by members of Milwaukee’s Irish community, the Fest covers 74 acres of Lake Michigan’s shoreline and showcases Irish music, history, dance, drama, sports and culture. The Festival is also used by tourist agencies such as Tourism Ireland, Aer Lingus and CIE Tours, as an opportunity to market Ireland as a desirable tourist destination.

The travelling Ború tourism delegation will be located in the festival’s ‘Cultural Pavilion,’ where extensive promotional material on visitor attractions associated with Ború will be distributed.

Members of the delegation, which includes historians, living history interpreters, genealogists, musicians, a bowyer and a folk theatre group will also deliver a series of public lectures and demonstrations on Brian Ború’s life in culture, history, food, genealogy and music.

Among the sites and buildings associated with Brian Ború that will be promoted in Milwaukee will be Killaloe where he was born, Clontarf where he was killed following his victory over the Viking rulers of Dublin in 1014, St. Patrick’s Cathedral in the City of Armagh where he is buried; the Rock of Cashel where he was crowned High King of Ireland; and Lough Derg and the River Shannon where his navy was located.

All four locations feature prominently in the National Brian Ború Programme, a comprehensive nationwide programme of commemorative festivals and events taking place during 2014.

Sean Laffey, writer and editor for Irish Music Magazine, headed up the Cashel Heritage group, which produced the 2014 Ború celebrations. He will speak on the music of warriors, among other things.
Geraldine Wall Laffey, an educator, will present scriptorium lettering in both the Children’s Tent and the Boru Tent
Joanne Hughes, an archaeologist and member of the Cashel Heritage Group, is an expert on the Viking excavations in Ireland. She will present a Viking dig in Viking costume in the Children’s area.

In addition, Maurice Lennon and the Willis Clan will present Lennon’s Brian Ború ‘The High King of Tara’, at the festival. This orchestral suite, written by Lennon in 2002, was produced by Lennon and Donal Lunny, who will also appear at the 2014 Milwaukee Irish Festival. Clare artists Sharon Shannon and Socks in the Frying Pan will also perform at the Fest.

Visit www.brianborumillennium.ie to learn about the National Brian Ború Programme of events taking place during the remainder of 2014. Visit www.irishfest.com for more on Milwaukee Irish Fest.