“Oft did the harvest to their sickle yield, Their furrow oft the stubborn glebe has broke;
How jocund did they drive their team afield! How bow’d the woods beneath their sturdy stroke!
Let not ambition mock their useful toil, Their homely joys, and destiny obscure;
Nor Grandeur hear with a disdainful smile, The short and simple annals of the poor.”

Tipperary’s new Senior Hurling manager, Michael Ryan, will officially launch the eagerly awaited 2015 Upperchurch-Drombane Historical Journal this Saturday night Nov. 7th in Upperchurch Hall, starting at 8:00pm. This sixth annual publication, in this very successful series, has stories, poems and photographs dealing with many aspects of the history and heritage of the parish and indeed the frequent and continuous demand for back volumes prove the lasting value of each past publication. 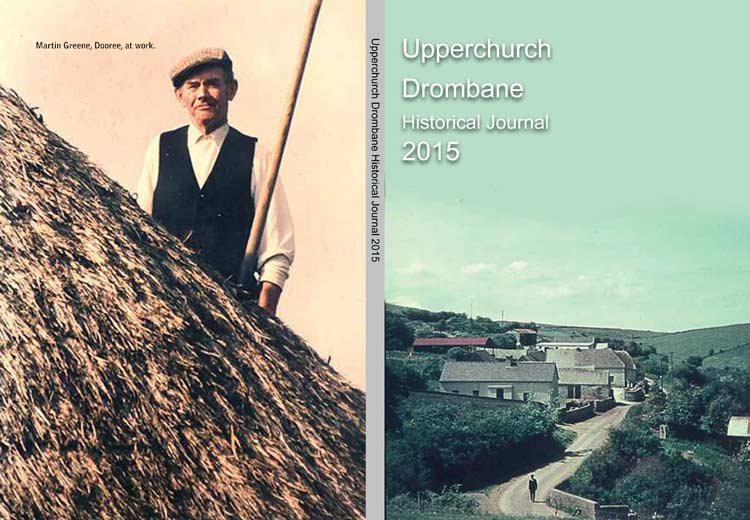 At this official launch there will be a short talk about the history of local emigration by a regular contributor to the Journal, Eugene Shortt. Same will be followed by discussion and a question and answer session. Stories and accounts from the floor are always much welcomed at such events.

While tales of G.A.A. sports have historically been the most prominent locally, the book this year puts the spotlight on other sports where there were local connections, e.g. American Gerry Britt, a frequent visitor whose ancestors came from the area and who has published an account of his travels in Ireland, writes about the famous baseball player and manager John McGraw, who dominated the game in the USA in the early years of the last century. McGraw’s father had parents who emigrated from the parish.

The victory of locally owned ‘Rugged Lucy’ in the 1981 Galway Plate is recalled by John Ryan (C) while Tom Quinlan writes about the three Irish Senior Soccer Internationals, Shane Long, Seamus McDonagh and Mike Milligan whose ancestors were local. Billy Clancy writes about one of the greatest ever scandals in greyhound racing; which occurred sixty five years ago, involving a greyhound from Upperchurch, which today has a street in England named after it.

Sports including handball and racquet ball also feature in Paddy Dwyer’s reminiscences entitled “Gortahoola Memories”, along with the story of Gortahoola School, latter which operated for only nineteen years. ‘Courting’ (That period in a couple’s relationship which precedes marraige.) might also be considered a type of ‘sport’ by some and in verse Ned Harrington describes the goings on at the Metal Bridge Platform, in more innocent times.

A hundred years ago Ned’s grandfather John wrote a stirring patriotic ode to the green flag of Ireland, which demonstrated an encyclopaedic knowledge of Irish history, and the poem is given in full. Also on a patriotic theme, Thomas Fogarty tells of a few local connections with the 1916 rising, which also includes is the first half of Paddy Kinnane’s statement to the Bureau of Military History concerning his involvement in the War of Independence. The final part of the ‘Eamon an Chnoic‘ play is also in this new publication, as well as a continuation examining the local burial records.

Andy Byrne completes his list of local musicians and reproduces the happenings of a hundred years ago from the newspaper archives. Among the hundreds of religious and missionaries, the parish produced, were seven priests from the O’Rourke family and Joan Ryan gives a short account of each of them.

Nowadays we take for granted and frequently complain about our road networks, failing to appreciate the hardships suffered by our ancestors in putting them there in the first place; using pick, shovel, horse and cart. Eugene Shortt has researched the subject and gives the details of the various roads, fences, bridges and gullets and who put them there and when. There is also an account of the legal case concerning the Mulgrave Bridge at Drombane Creamery, which was built on a disputed land site and the ensuing tragic aftermath.

Like the road networks, it took centuries of work and nurturing to bring our agricultural land to its present state of fertility. One of the big breakthroughs was the introduction of lime from kilns and Frankie Shortt describes the process of burning lime in the various local kilns. Eamonn Ryan also deals with the subject in later years when lime from Killough Quarry became available. He also recounts early drivers and their cars and the impact of Hogan’s bus service together with wartime shortages.

All are welcome to attend this launch on Saturday night and this latest publication will be available from the usual outlets from Sunday onwards. Overseas buyers can of course order online from www.upperchurch.ie.

Wherever you reside today, this latest publication promises to be a truly heart warming read on the long expected winter nights ahead.

This entry was posted in Books, County News, History, Tourism. Bookmark the permalink.