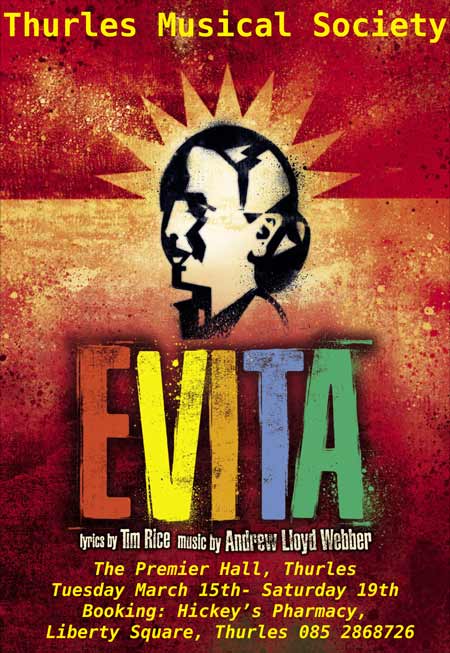 A sixty strong cast has been in rehearsals since early in January, under the watchful eye of Director David Hennessy, Musical Director Mary Rose McNally, Choreographer Debbie Kieran, and Dance Captain Michelle O’Connell. All cast members are set for the stage with great excitement abounding in advance of the opening night, which will be a benefit night for the Thurles Presentation Secondary School’s current Astro Turf project.

Musical Composers & Principle Cast Membership
This hit musical ” was composed and written by the renowned duo, Andrew Lloyd Webber and Tim Rice and audiences will recognize instantly the hit songs such as ‘Don’t Cry for me Argentina’, ‘Another Suitcase in Another Hall’ and ‘Where Do We Go From Here’ and many more.

‘Evita’ tells the story of Eva Duarte, an ambitious young girl from a modest background, who hypnotized the nation of Argentina in the 1930s/40s. Seen by some as a hugely inspirational lady and for others, a woman to be feared and despised; she worked tirelessly against the rich and middle classes, attempting to destroy them. Eva was much famed throughout the world for her beauty and style. This reputation was matched only by this infamous woman’s pettiness and her endless lust for power. Through carefully planned relationships and a disregard for the opinions of others, she quickly rose in social ranks to become Argentina’s ‘First Lady’. This story translates easily to a powerful retelling, through beautiful music and truly gripping drama on stage.

Ché, a character based on the revolutionary Ché Guevara, will be played by Michael McLoughlin, who returns to the stage with TMS having played the lead role in Jekyll and Hyde among many other leading parts. Barry Derby will amuse audiences in the role of ‘Magaldi’, a musician who aids fifteen-year-old Eva on her search for fame. (‘On This Night of a Thousand Stars’ is his big number).

Peron is played by the award winning Cathal O’Donoghue who won ‘Best Comedian’ in last years ‘AIMS Awards’, while the vastly experienced and equally decorated Cathy Keane will plays the lead role of Evita. The relationship between protagonist, Eva, and political leader, Juan Peron, was scandalous, questionable, dynamic and romantic – an aspect that is easily achieved by this Thurles pair, who coincidently also played opposite each other in Tipperary Musical Society’s ‘High Society’ just a few years ago.

As ‘Evita’ requires a chorus that represents a nation, the cast will comprise both adults and children and our magnificent kids have been working hard to ensure readiness for ‘Opening Night’. Younger members are drawn from schools from the parish and surrounding areas and are understandably very excited about ‘Evita’.

The Booking Office in Hickey’s Pharmacy, Liberty Square, Thurles opens from Tuesday March 8th right through the running of the this production. Tickets cost €20 with concessions for OAPS on Wednesday at €10. All tickets for the Tuesday evening performance also cost €20. The show commences at 8:15pm. You may of course Telephone: 085-2868726 to book your seat.

Don’t miss this chance to see a magnificent piece of International Musical Theatre performed locally here on your own doorstep.