Well-known Irish painter, Richard Thomas Moynan (27th April 1856-10th April 1906) was born in Dublin at No.1 Eldon Terrace, off the South Circular Road. He was the fourth of eight children; three sons and five daughters, born to Mr Richard Moynan (Sr.) and his wife Harriet (nee Nobel and daughter of Arthur Nobel, a Church of Ireland clergyman).  The father of Richard Moynan (Jr.) held a managerial position with the fabric importers Ferrier, Pollock and Company, who had registered offices at No. 59 William Street, Dublin.

The Paintings Of Richard Thomas Moynan by George Willoughby.

Richard Moynan (Jr.) initially studied medicine; however, his artistic instincts would prove to be too strong to be resisted and shortly before his final medical examinations, he decided instead to commence his training in the arts, at the Dublin Metropolitan School of Art, in January 1880.

Somewhat older than his fellow students and perhaps better educated; Richard Moynan was soon winning prizes in the Taylor and Cowper competitions. [The Taylor Art Trust was formed in 1878 in response to the will of Captain George Archibald Taylor, latter who died in 1854 leaving £2,000 for the “the promotion of art and industry in Ireland”.]

In 1882 he moved on to the Royal Hibernian Academy, winning both silver and bronze medals for his talents and in the following year, 1883, achieved the Albert Scholarship for the best picture shown at the Royal Hibernian Academy by any student. This painting entitled “The Last of the 24th at Isandula” (RHA, 1883), portrayed an imaginary episode in the Zulu wars fought in 1879 between the British Empire and the Zulu Kingdom. 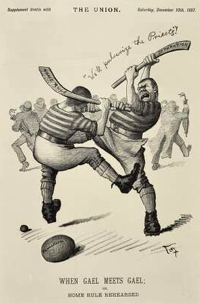 Here he attained first place, becoming the first Irishman to achieve such an award, which now ranked him among the elite, thus allowing him the privilege of special tuition from painting professor Verlat (1824-90), as well as extra studio space. He moved to Paris sometime in 1885, but by the end of the 1880’s he returned to his native Dublin to exhibit his art works. In 1887, he was employed by a Dublin newspaper, “The Union”, as a political cartoonist, using the pen name “Lex”, before becoming a member of the Royal Hibernian Academy in 1890.

Passion of a different kind would how draw him in the direction of Thurles, Co. Tipperary; to No. 41 Garryvicleheen Street, (The area is best known today as Friar Street and Abbey Road). With love and romance in mind, he returned home to Ireland immediately after his Concours d’Elegance success. Here in Thurles he would marry his cousin, Ms Suzanna Mary Moynan, (1856-1932), in her home on April 9th 1884, just seven months prior to the founding of the Gaelic Athletic Association (GAA) (November 1, 1884), at Hayes Hotel, in Liberty Square, Thurles.

For some time, Richard Moynan became a leading and popular exhibitor at the Royal Hibernian Academy. Popular as a portrait painter; his most sought-after pictures, today, are possibly those depicting the innocence of 19th century domestic life, through the activities of children e.g. “Military Manoeuvres”, “Tug of War” and “Ball in the Cap”. The poverty of Dublin streets were also a source for his inspiration, e.g.” The Newspaper Boy”, and “The Village Pump”, all of which are shown in our video above.

Alas, like some many great intellects, he would give way to the abuse of alcohol consumption which in turn seriously affected his artistic ability, wrecking his career and his health. For possibly four years he painted little and died at No. 15 Garville Avenue, Rathgar, Co. Dublin on April 10th 1906 and was buried on April 12th at Mount Jerome Cemetery, Dublin.

Ten years later, in the census of 1911, the Moynan family had moved and were now living at No.33, Kimmage Road, Co. Dublin. Present then were, Susanna Mary Moynan, aged 55, now a widow; Eileen Norah, daughter, aged 23, a shorthand typist, single, and Allen Victor Dagg, latter a 21-year-old Bank Clerk, born in Co. Wicklow, listed as “a Boarder”. Her son Richard was living with his Aunt [sister of his late father] Anna Susannah Ouseley Moynan Allen and her husband Wentworth Allen, at King Edward Road, Bray, Co. Wicklow. Further research reveals Susanna had given birth to 3 children, 2 of whom were still alive.

At the time of her death, aged 76, Susanna Mary Moynan was living at No.6, Zion Hill Terrace, Kimmage Road, Co. Dublin. She is buried in a vault at Mount Jerome Cemetery and Crematorium, Dublin, Co. Dublin. [Vault C109-2617] that also contains her husband, their children, and his parents and two of their relatives. Nine other members of the Moynan family and 2 members of the Ouseley family are also buried in the same Vault.