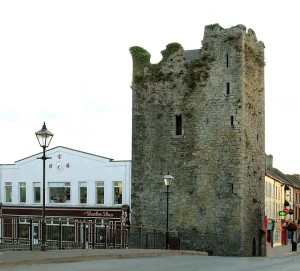 Barry’s Bridge in Thurles, Co Tipperary, providing passage over the river Suir, was originally built circa 1650 and was partially reconstructed again circa 1820. Bridge Castle, overlooking this seasonally shallow river crossing, has dominated the Thurles skyline since as early as 1453, built possibly by the Norman invader McRickard Butler of whom history records that he erected, in 1453, two castles at Thurles and one at Buaidlic (Boulick).

The Down Survey (1655 – 1656), also known as the Civil Survey, (A mapping of Ireland undertaken by Sir William Petty, English Economist, Scientist and Philosopher), lists James Butler, Earl of Ormond (1610 – 1688) and Lady Elizabeth Butler (Alias Preston) Viscountess Dowager of Thurles, (1615 – 1685) as the proprietors.

(Note: Both the latter named are direct progenitors to the present heirs to the British Throne. See Royal Family Tree.)

This medieval tower house is quite similar to many others erected  across Ireland around the middle of 1400, to control, collect tolls and if necessary defend various similar river crossings against attack, using small garrisons of armed soldiers, housed in these buildings. 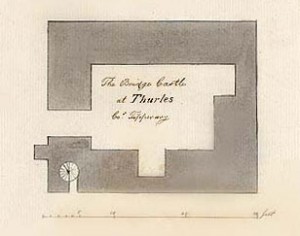 It is a small three storey tower with a vault over the first floor. The original doorway may have been set in the west wall and a spiral stairway rises in the north west corner, giving full access to all the upper floors. A small fragment of the original east facing arched gateway of the walled town protrudes today, still attached to the north wall of this building. The existing small pointed, arch doorway, also on the north wall was possibly constructed to grant immediate access from the tower, for those guarding this entrance into the town, from this river crossing. Little history is actually recorded about Bridge Castle, however records exist showing that on the 17th June 1617 the castle was leased “Thomas, Lord Viscount Thurles, by deed grants to Richard Power, Donat O’Haly and Rd. Wale, all that castle called Bridge Castle with its appurtenances, parcel of the Manor and Lands of Thurles, for 21 years at £5 per annum and one swine, one sheep and three capons.” (Note: A capon is a rooster that has been castrated to improve the quality of its flesh, for eating purposes.) 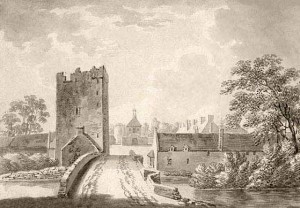 History also records that there were great celebrations in Thurles in 1768 when Francis Mathew, 1st Baron Landaff, later 1st Viscount Landaff and again later 1st Earl of Landaff (1738 – 1806) was elected Tipperary Member of Parliament, a position he held from 1768 to 1783. History informs us that bonfires burned, with the castle, bridge and market house illuminated. There was plenty of free drink available, with soldiers joining the local populace in the ensuing celebrations.

This wash drawing, shown above, facing westward, (Circa 1779-1793, attributed to English artist J.J. Barralet 1747-1815.) shows the town of Thurles, with Bridge Castle in the foreground leading into the town, with a castle on the left, (Today the entrance to Friar Street.) and a Market House in the town square. (Latter, partially ruined by fire, was demolished in 1901.) The castle building today still remains in excellent structural condition.