The Abbey of Holycross [Map Ref.] has stood on its present site for at least the last 830 years. It has witnessed its fair share of prosperous and difficult times. There may have been a Benedictine Monastery in Ceall Uachtair Lamhann when Dónal Mór Ó Briain came here to establish a Cistercian monastery in 1182 AD.

His founding charter is the oldest written document relating to the Abbey and the original is in The National Library in Dublin. This document was written on parchment paper. It was handwritten, probably in a monastery, in a stylised script. The tall lettering shows German influences. Through this document the Abbey came into recorded history. The O’Brien family did own a Relic of the True Cross. It was presented to them by Pope Paschal II in 1110 AD for their work in reforming the Church in Ireland.

This relic was reported as being enshrined in the Abbey. The charter was drawn up for Dónal Mór Ó Briain, King of Limerick, whose kingdom reached to this point. It was here on the banks of the River Suir that he chose to establish a Cistertian monastery where a relic of the True Cross would be enshrined. 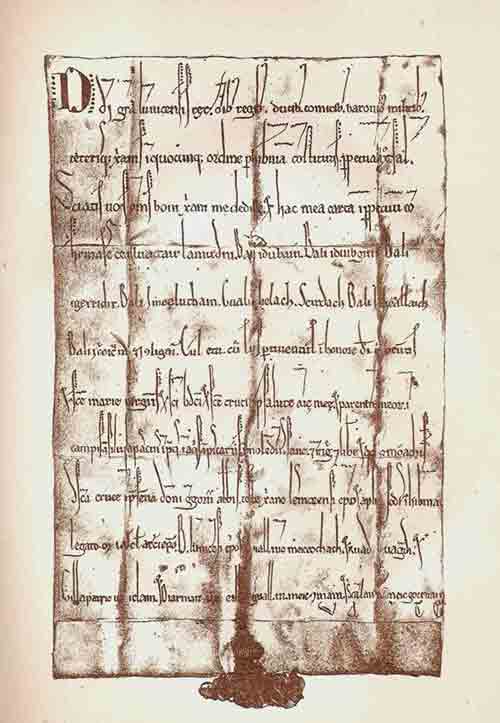 It reads: [Click on Image left for larger resolution.]
“Know you all good Christians that I have given these lands and by this my charter confirmed forever…. in honour of Almighty God and the Blessed Virgin Mary and St. Benedict and the Holy Cross, for the welfare of my soul and the souls of my parents, in fields, in woods, in pastures, meadows, waters, fisheries and mills wholly, entirely, freely and peacefully to the monks of Holycross.”

The lands he referred to extended to 8,000 acres and coincides closely with the present day parish of Holycross-Ballycahill. The charter was witnessed by local chieftains and the three bishops of Limerick, Cashel and Lismore.

There were good political and family reasons why Dónal Mór chose this site. First of all it was at the edge of his own territory and at the junction of three baronies namely Eliogarty, Kilnamanagh and Middlethird. Founding an Abbey on the boundaries of his kingdom would show his power and influence. It was also in O’Fogarty territory.

The barony of Eliogarty is named after the O’Fogarty Clan. Dónal’s Mór’s mother was
Raghnailt O’Fogarty and his great grandaunt was Gormlaith O’Fogarty who is mentioned
in The Annals of the Four Masters as a very charitable woman, distributing much wealth
among the poor of the land. This is why he would have had a special place in his heart for
Ceall Uachtair Lamhann, the name by which Holycross was formerly known.

Yet there is no O’Fogarty signature on the Founding Charter because Durlus O’Fogarty, the chief of the clan, had been routed and probably killed in the Battle of Thurles in 1179 when the Norman Raymond le Gros was claiming the territory of Munster granted to him by Henry II. As a result of the Relic of the True Cross being enshrined here the Abbey became a great place of pilgrimage.

In 2013, W. Hayes, the genius behind the restoration of the Abbey in the 1970’s, presented a beautiful hand-scripted copy of the charter in vellum to the Abbey. It is proudly displayed inside the main door to the left with the Latin script and its English translation.

The Highlights of a visit to Holycross Abbey.

The restored Holycross Abbey is unique. Its name comes from the fact that for centuries
after its foundation in 1182 AD and again today a Relic of the True Cross was and is on
display in the church.
As a building, Holycross Abbey has a great mix of features that blend well together.

Visit and learn more about about the local folklore, the stone carving, the legend and spell binding history. Guided tours continue every Wednesday at 2:00 pm and every Sunday at 2:00 pm. Of course, with advance notice, they can arrange group tours outside of these times.For more information, bookings and costs please phone 086 1665869 or email
holycrossabbeytours@gmail.com. They accept donations of between €3 to €5 per person.

The Guides try to suit the group taking into account the time they have available for their
tour, their particular interest, i.e. architecture, history, religion etc. Tours are subject to
changes due to ceremonies such as weddings, baptisms, funerals, etc. taking place in the
Abbey. The Abbey is their parish church and this why they need a contact number and/or the email of the organiser so they can give the visitor advance notice of unexpected changes.

Note: Guides are trained volunteers and are members of Holycross Community Network.

The River Suir meanders southwards through this picturesque and delightful village and same is straddled by an ancient stone arched bridge, marking a crossing point between the north of the county and the west. But it is this aforementioned famous restored abbey that dominates the view from every side. Same attracts over 250,000 pilgrims and tourists from Ireland and abroad each year, as it has done for centuries.

In addition to its history, heritage and services, the location of Holycross, (7 kilometres from Thurles latter one of Ireland’s best-serviced towns in terms of public transport and major road access; the M8 being less than 15 kilometres away ) is regarded as a landscape and picture postcard haven for those dedicated to the art of photography.

As well as being close to a significant transport hub, it is also within 15 kilometres of the Rock of Cashel, one of the worlds premier tourist attractions.