The first early Norman fortification at Farney Castle, close to Holycross, in Co Tipperary was built in 1185 just some fifteen years after Richard de Clare (Strongbow) arrived in Ireland (1170) and would have consisted initially of a stout timber structure. The present existing stone round tower was completed in 1495 by Thomas Butler, 7th Earl of Ormond, (Known as ‘The Wool Earl,’ due to his enormous wealth). Same was part of a defensive system created by the Butlers to protect their acquired lands in Tipperary. 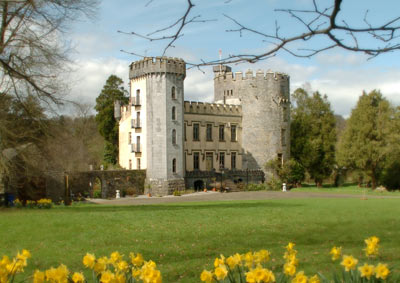 This same Thomas Butler, the youngest son of James Butler, 4th Earl of Ormond, (By his first wife, Joan de Beauchampand), would become Lord Chamberlain (1509 – 1512) to Catherine of Aragon, latter the reining Queen of England from 1509 until 1533, as the first wife of King Henry VIII.

The Butler name remained synonymous with Farney Castle for some 500 years, but in 1536 the castle was confiscated by King Henry VIII, however he later returned the lands to the Butlers two years later, following his marriage to Anne Boleyn, the daughter of James, 3rd Earl of Ormond. Subsequently this castle was held for some short periods of time by two other English monarchs, namely King James 1st from 1617-1625, and King George 1st from 1716 -1721.

In August 1649 Oliver Cromwell landed in Ireland with his New Model Army, on behalf of England’s Rump Parliament. Shortly after 1650 a Cromwellian soldier named Hulett (Christian name unknown) took control of the castle.

When Charles II was restored to power in 1660, one Capt. William Armstrong, son of Colonel Sir Thomas Armstrong and Anna Anderson, the former a Cavalier who had supported the Stuarts and who had fought against Cromwell, now was granted the castle and lands. The Armstrong name, which originates from a Scottish Border country family, remained associated with the castle for the next 200 years. William Armstrong would marry Alice Deane, daughter of Sir Thomas Deane and in 1669 would be appointed Commissioner for Payroll Tax. Over the next ten years he would add to his land holdings, including the former lands of the nearby famous Holy Cross Abbey and lands also situated at nearby Ballycahill. His younger son from this marriage, one Thomas Armstrong, would later marry Mary Carew, daughter of Robert Carew of Castleboro House, County Wexford, thus establishing a new branch of the family in the nearby towns-land of Moyaliffe, Co Tipperary.

The present round tower of this magnificently restored Castle stands 58 ft. and five stories high. Same is somewhat unusual in that it is completely circular, whereas the majority of these types of structures constructed in Ireland were either square or oblong. The castle possesses a ‘Mural Staircase’ (Stone stairs built within the thickness of the walls) off of which it appears that secret rooms may still exist, as yet undiscovered. The main door was opened up by the present owner Mr Cyril Cullen, having been closed for over 200 years. There is a Meurtrière (murder hole) over the main door, through which historically castle defenders could fire, throw or pour harmful substances or objects, such as rocks, arrows, scalding water, hot sand, quicklime, tar, or boiling oil, down on any intruding attackers.

In the converted old stables in the castle courtyard can be found Cyril’s design studio, where his unique Parian porcelain designs find their desirable textured forms. (Parian wear is a type of bisque porcelain named after Paros, latter a Greek island, renowned for its very fine-textured white marble of the same name.)
Select pieces of Cyril’s hand crafted and highly collectable porcelain are sold here, in what was once the old dairy, situated in the castle grounds.

Cyril’s hand crafted knitwear boutique is situated in the original kitchen of the castle. Here  can be viewed garments, manufactured using only natural and organic fibres and yarns. Cyril uses the wool from his rare flock of Jacob sheep. There is no dye used in these unique garments, as the fleece of just a single sheep can provide the required dark browns, light browns and greys he uses in his individual designs. Another unique feature of a Cyril Cullen garment is the addition of porcelain buttons with his initials ‘CC‘ carved in old Celtic script, thus making his unique designs instantly recognisable.

A coffee shop is situated within the 15th century round tower, thus making this castle a perfect halting venue for visitors to Tipperary .

Tours of Farney Castle are available daily and Harp Recitals take place in the ancient Drawing Room, by special arrangement.

Farney Castle has been recommended by the Michelin Green Guide and Marathon Coach Tours have included it in the 2014 Tour Brochure.