Horse & Jockey Thurles Remembers The Past 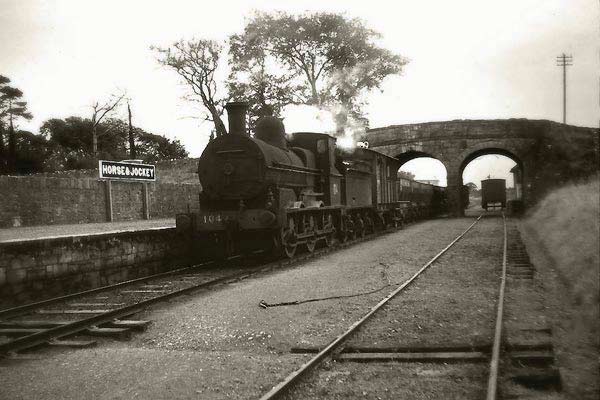 An event, which will take place at the Horse & Jockey tomorrow Thursday 7th June, is expected to attract a large attendance. This event is an attempt to take a long look back at the past historical associations with this immediate area, here in Co. Tipperary.

A descriptions to be found in Bassett’s Directory 1889 informs us that the now village of Horse and Jockey was, quote:-

Horse and Jockey, a village of 6 houses, in the parish of Moycarkey, barony of Eliogarty, is a station on the Southern Railway, 5  3/4 miles, English, south-east of Thurles. The land of the district has a limestone basis, and is good for pasture and tillage. It is excellent sheep country. There are extensive remains of the castle of Moycarkey, on the estate of Mr. John Max. It was at one time occupied as the residence of the Cantwell family, and has a large square tower, with high surrounding wall. A fissure in the tower was caused by lightning over a hundred years ago.

This immediate area is of national historical significance. For example, the village has a close historical association with the infamous murder, on Sat. 30th June 1826, of Richard Chadwick by one Paddy Grace, born near Ballytarsna castle, who foolishly volunteered to become the formers executioner. Latter was eventually tried & ordered to be hanged where he had committed the crime, but tradition is that he was hanged, then tied to a dray car & dragged along the road from Clonmel via Cashel accompanied by his chaplain, Rev. Ed. Brennan, together with a large force of Police & Military. What remained of his body was not given to his relatives as was usual, but he was taken to Cashel infirmary for dissection & burial later in the infirmary grounds. His gloves were handed by a relative to an old man named John Russell of Curaheen, Horse & Jockey, as a keepsake. (I wonder where those gloves are now.)

Then of course, close-by, saw the arrest of the Young Ireland 1848 leaders, T.F. Meagher, M.R. Leyne & P. O’Donohue, who were identified loitering at midnight on Chadwick’s Bridge and lodged in a cell, before being sent next day to Thurles jail, under armed escort.

November 1823 saw the attack on the mail coach at Horse & Jockey. Large stones & horse carts had been placed across the road to stop the coach & even shots were fired luckily without effect. The driver or his guard got the coach past the obstructions, but in doing so, the coach was turned over against a ditch. The fusillade continued until locals came, attracted by the gun shots. Attackers then decamped & the coach was set to rights. When it reached Cashel, however a passenger, the Hon. Mr. Brown, brother of Lord Kenmare, was found missing. During the attack he had alighted on the opposite side of the coach & had taken refuge in a neighbouring house, from whence he arrived in Cork the next day in a Post Chaise, thankfully nothing the worse for his adventure.

There are so many historical associations with this area, but on hand to-morrow night will be GAA County Board Chairman Sean Nugent, former government minister Martin Mansergh & Rev.Norman Gamble, who will enlighten their audience with “Tales of the Unexpected,” so do try to be there sharp at 8.00 pm in the Horse & Jockey Hotel.

“Boys Oh Boys could I tell you tales of the goings-on in that den of iniquity known as the Horse & Jockey, but I have sworn a solemn oath to keep my mouth tightly shut till after this event.”

This entry was posted in History, News. Bookmark the permalink.

11 Responses to Horse & Jockey Thurles Remembers The Past