Thousands of Irish people and overseas visitors are expected to tread our National Pilgrim Paths on April 4th, 2015. 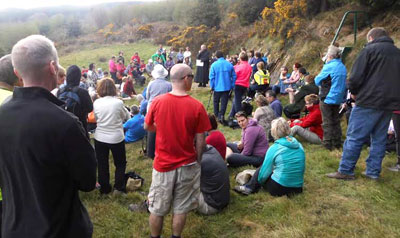 Ireland’s National Pilgrim Paths Day, on April 4th next, is aimed at raising awareness of our country’s wide network of pilgrim routes, while also providing a more general appreciation of our medieval Christian heritage.

To this end on Saturday, April 4th, 2015, large numbers of Irish people and overseas visitors are expected to retrace their ancestral heritage this coming Easter Weekend, as they take to this countries ancient pilgrim paths, to celebrate Ireland’s second ‘National Pilgrim Paths Day’.

This new Easter Festival will see a nationwide series of non-denominational, pilgrim walks taking place on Ireland’s medieval penitential trails. Last year, there were over 1,800 participants for Ireland’s inaugural Pilgrim Paths Day and this year it is expected that the numbers will be even higher.

Heritage guides from these communities will lead each event while outlining the story of the route and explaining how medieval penitents coped with their arduous journeys.

There will also be a reflection and thanksgiving at the end of the walk.

For full details of all pilgrim walks nationwide take the time to visit; www. pilgrimpath.ie