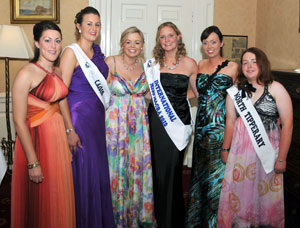 The scenic village of Clonoulty, [Map Ref:] here in Co Tipperary is once again honoured to host their annual International Miss Macra Festival, which this year celebrates their 40th anniversary. Over 26 beautiful young ladies from Ireland and abroad will arrive in the village tomorrow night to meet their host families and the organising committee.

RTÉ’s Nationwide will be sending their camera’s to cover this years event, latter hosted by the popular duo of Mary Kennedy and Michael Ryan, in Dundrum House Hotel.

Outline of the Weekend’s Activities

Thursday 28th July: 6.00-7.30 pm – Contestants arrive in Dundrum House Hotel to meet organising committee and at 9.oopm contestants get to meet and greet with their Host Families in Clonoulty Community Centre, followed by a ceilí and other entertainment. The launch of a 40th celebration and Commemorative Booklet will also be held here.

Saturday 30th July: 9.00am begins Interviews for all the contestants in ‘The Multeen Suite,’ in  Dundrum House Hotel.
1.00pm –  Sound rehearsals for the cabaret.  2.00pm – Hairdresser appointments.  7.00pm – Mass in Rossmore Church. 8.00pm – Cabaret in marquee adjacent to ‘The Venue,’ followed by dancing to ‘No Recession,’ and late night disco.

Clonoulty Macra look forward to seeing you all there.

This entry was posted in News. Bookmark the permalink.