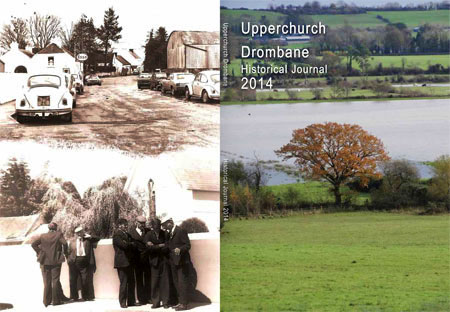 This year’s Upperchurch-Drombane Historical Journal will be officially launched in Upperchurch Hall this Sunday December 7th at 11.30 a.m. This is the fifth edition of the popular local publication and has the usual complement of historical records, articles, poems and photographs.
(Left Click on Image Left for larger magnification.)

Guest of honour this year will be Mr. Con Ryan of Glown, Upperchurch, whose record of activity in community affairs down through the years, is immense. Con will be joined by Mr Jimmy Duggan of Thurles, an equally tireless contributor to local activities. Jimmy will give a short talk on the history and ecosystem of bogs. The new one kilometre bog walk beside the community centre was opened just this year and excellent new interpretive signs have now been erected. Weather permitting, this talk will be given while walking around the bog. All are welcome to attend this event.

New contributors to this year’s journal will include Mr Eamon Ryan who has an interesting article on home butter making. Ms Evelyn O’Regan writes on the lives of two nuns from Drombane who were part of a group of some forty who left the Borrisoleigh area to go to Kansas in 1895. Br. Thomas Moynihan went in the opposite direction to India and his story is recounted by his nieces Margaret Hassey and Geraldine Duggan. Locals; Mr Ned Harrington and Ms Maura Armstrong have both contributed poetry.

The old reliable contributors are again led by Mr Eugene Shortt who takes us through a personal summary of parish history from the Ice Age to the new GAA dressing rooms. He also provides a list of the 133 families who lived in the towns-land of Drombane back in 1835. His brother Frankie trawls through the Civil and Down Surveys of the mid 17th century to examine the many place names no longer in use. Mr Paddy Dwyer has researched the history of the many local forges with the help of Mr Tom Stapleton and Mr Billy Clancy.

Part of the parish of Upperchurch-Drombane once belonged to the Castlefogarty estate in days gone by. Mr Thomas Fogarty explores these links and tells the tale of a member of the Fogarty family who fell foul of the Hastings born Titus Oates, latter the English perjurer who fabricated the “Popish Plot”, a supposed Catholic conspiracy to kill King Charles II. Titus Oates also inspired anti-Catholic hysteria that claimed the life of St. Oliver Plunkett.

Mr Eddie Kennedy was a world class race walker, who came from the Shanballyduff area and his remarkable story is told by Mr Tom Quinlan.

Last year Ms Joan Ryan gave an account of all the parish Priests to have ministered in Upperchurch and this year the complete list of curates is added. There are local people who can recall fifteen of them!

Mr Andy Byrne gives a history of music and musicians and also reminds us of local events held 50 to 100 years ago.

The Interment Lists relating to the local cemeteries are again added. Those who enjoyed the “Eamon an Chnoic” play two years ago will be pleased to note that the script is being published, (Act One this year and Act Two next year).

As the 2010 journal is now completely sold out it will be made available for viewing shortly in pdf format at www.upperchurch.ie.

Extra copies have been printed from subsequent years, however these are unlikely to be put on the website in the foreseeable future.

This entry was posted in Books, County News, History, Religion. Bookmark the permalink.