“A poor life this if,  full of care, we have no time to stand and stare.”

All too often these days, in the hustle and bustle of our individual daily life, we fail to take time to‘stand and stare’, to observe and enjoy with local pride the many historic symbolic gems contained within our own individual communities. Many of these gems are to be found staring us in the face on a daily basis, their significance now perhaps partially erased from the blackboards of our minds, as we go about scratching a livelihood for ourselves and our dependants.

The Watson stained glass window in St Mary’s Church, Thurles, which we discuss hereunder, is one such perhaps temporary forgotten artistic gem. 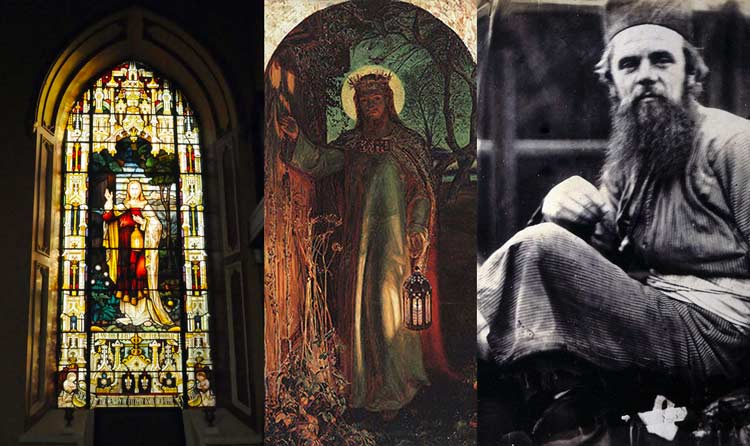 The original allegorical portrait (centre above) depicted by James Watson in this stained glass window is the work of renowned Pre-Raphaelite artist William Holman Hunt. This work, entitled “The Light of the World,” was originally painted by night in a makeshift hut at Worcester Park Farm in Surrey, England, between the years 1851 & 1853. Due to Holman Hunt’s failing eyesight, he was assisted in the completion of a larger version of this painting by the English painter Edward Robert Hughes.

The painting (Centre above) and stained glass depiction (Left above) both show the figure of Jesus Christ knocking on a door and careful further study indicates that this same painted overgrown entrance has remained unopened for some considerable time. In his painting Holman Hunt is attempting to illustrate a quote from the New Testament scriptures; to be precise the Book of Revelation: Chapter 3: Verse 20: “Behold, I stand at the door and knock; if any man hear My voice, and open the door, I will come in to him, and will sup with him, and he with Me”. Viewers of the original painting will note that this depicted door has no visible handle and can therefore only be opened from the inside, thus representing the choice given to the closed and unsure minds of both lapsed Christians and non-believers.

Here in Thurles regrettably, we do not have Holman Hunt’s wonderful painting “The Light of the World,” to view; same lovers of art must travel to the Chapel at Keble College, Oxford, or to St Paul’s Cathedral in London, where a later version, latter which once toured the world, has now taken up residents. However here in Thurles we do own the next best thing; “The Light of the World,” as depicted by renowned stained glass artist James Watson of Youghal, Co Cork.

James Watson, born in England circa 1860, came from a long line of English stained-glass manufacturing artists. In 1888, attracted by the growth in church building in Ireland, both Catholic and Protestant, James moved to Youghal, with his wife, Mary and his sons Hubert and Maurice. His reputation as a stained glass artist soon became a by-word for artistic excellence, with the importing of brilliantly coloured glass from Europe; the red from England, the best blue’s, orange and yellow’s coming from France and the green’s coming from Germany. Watson would eventually go on to exhibit his stained glass at the St Louis World’s Fair of 1904.

Using large detailed artistic drawings called “cartoons,” painting was undertaken using a translucent stain
which was then applied in numerous layers, giving that masterful effect of light and shade. The final tiny details achieved often using a needle and each complex masterpiece produced demanding several firings. The required leading, joining each piece of painted glass, had to be made by a hand cranked machine, while thermally insulated chambers or kilns used, took days to fire up.

Although the Watson workshop survived until recently, maintained by successive generations of the Watson family, much of the firm’s finest work was done in the early years of the 20th century, as can be seen in the designs and drawings displayed currently at the Crawford Art Gallery, Emmet Place, Cork, under the stewardship of Exhibition Curator M/s Vera Ryan, latter who recently visited Thurles to view the Watson window in St Mary’s Church.

Note: A truly magnificent “Watson Archive Exhibition” is currently on display at the Crawford Art Gallery, Emmet Place, Cork, containing some one thousand works on paper, including records, account books and other material. This exhibition will only run until March 2015, but is a must see for lovers of art and indeed Tipperary history.

1 Response to The Stained Glass Window’s Of James Watson