The ancient art of Handbell Ringing is largely unheard of here in Southern Ireland; first Handbells having being developed by brothers Robert and William Cor in Aldbourne, Wiltshire, England, between 1696 and 1724.

Now on Friday next two simultaneous Hand Bell Ringing Marathon Recital events will take place in the area of the village of Borrisoleigh, Thurles, Co. Tipperary on Friday next, July 27th, 2018. The bell ringing recitals will be conducted by the London-based guild of St. Cualan, under the direction of Mr Thomas Hinks.

This St. Cualan Guild take their name from the Bearnan Cualan, a 12th century Irish bell shrine, which originally belonged to the monastery of St Cualan at Glenkeen, Borrisoleigh, in Co. Tipperary. 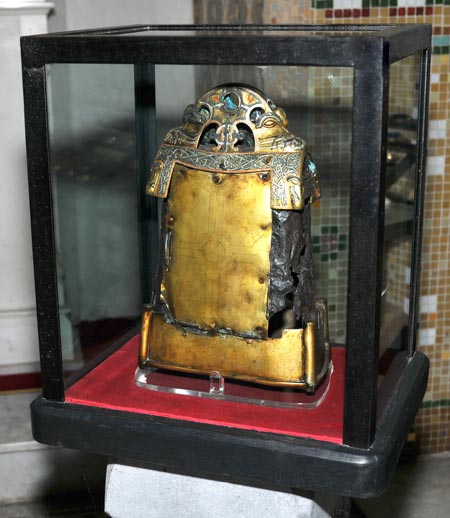 It had been located hidden in a tree trunk in the townsland of Kilcuilawn, Borrisoleigh, Co. Tipperary, in the late 18th century and the original now resides in the British Museum in London, (Reference Record No. 1854,0714.6.B.)

The bell shrine is decorated in what is possibly an Irish version of the Viking Ringerike style, (Ringerike style receives its name from the Ringerike district north of Oslo, in Norway who produced similar designs), with an inlaid Silver and Niello strip, (latter manufactured by fusing together copper, silver and lead before mixing the molten alloy with sulfur).

The work is similar to that found on the Clonmacnoise Crozier and the Lough Derg Sword and indeed it is quite likely that all three pieces may have originated from the same metal workshop. It is also possible that all three pieces were made either for use at or in commemoration of the Synod of Ráith Bressail, which met near Borrisoleigh in the year 1111. Latter was the most important of all the synods associated with the twelfth-century Church Reform movement in Ireland, organising for the first time an administrative structure and a territory based system of dioceses under the control of individual bishops.

The original bell is partially incomplete; missing its internal ‘clapper’ and a handle, however, an accurate replica of the shrine is kept on open display in the Roman Catholic parish Church of The Sacred Heart in the picturesque village of Borrisoleigh, just 14km or 16 mins drive from Thurles, Co. Tipperary, via route R498.

The bell somehow came into the possession of Birr attorney and historian Thomas Lawlor Cooke from Borrisoleigh, Co. Tipperary, who wrote important histories on the town of Birr and district [`Picture of Parsonstown’ (1826)]. Cooke went on to sell the bell shrine, along with other artefacts, to the British Museum, where it has remained as part of religious displays ever since.

When this visiting guild of bell ringers were first formed, they were not fully aware of the ancient story behind the famous Bearnan Cualan and its association with Borrisoleigh village.

Now, at about 1.00pm on Friday next, July 27th the welcome Bearnan Cualan Chapter will divide into two groups. One half will remain in the Church of The Sacred Heart, Borrisoleigh; while the other half will attend near the ivy-covered medieval ruins of Glenkeen church, before both commence a three hour long ‘Marathon Peal’.

Needless to say, everyone is invited to make an appearance to either or both venues and to remain for whatever length of time they can spare.

This entry was posted in County News, History, Visitor Attractions. Bookmark the permalink.