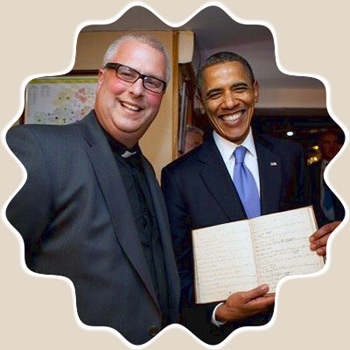 Church of Ireland Rector, Canon Stephen Neill, the man who confirmed US President Barack Obama’s ancestral roots with Moneygall, has decided to pull up and relocate his own roots.

The 45 year old has announced he is leaving his Cloughjordan and the Borrisokane Group of parishes to become Rector of Celbridge and Straffan with Newcastle–Lyons. His Service of Institution as Incumbent of the latter parishes will take place on Thursday, February 12th, 2015 next at 8.00pm in Christ Church, Celbridge, Co Kildare.

Canon Neill has ministered to Cloughjordan residents for the past seventeen years and as part of his move, he now relinquishes his Church of Ireland “Canon” status; laughingly admitting “I will be getting €50 less a month in salary, so I’m not going for the money.”

In explaining his desire to uproot, Canon Neill explains that he now seeks new challenges and fears becoming “too comfortable,” latter which has caused “an itch that needs to be scratched.”

Canon Neill admits that leaving the Cloughjordan and Borrisokane Group of parishes won’t be easy for himself, or for his wife Nicola and their teenage son Aaron. He feels a sense of guilt and regret walking away, after such a long time, having secured strong bonds of proven loyalty and tested friendships with those within his community; all of whom have stood together with him, through thick and thin.

The Dublin born Canon, who is also Precentor of the joint chapter of St Mary’s Cathedral, Limerick and St Flannan’s Cathedral, Killaloe, made headlines around the world after his research led to the confirmation that US President Barack Obama’s great-great-grandfather Joseph Kearney had been baptised in the parish of Moneygall. Indeed his personal contribution, within the wider midland regions of Ireland to encourage tourism alone, has been outstanding.

President Barak Obama – His Ancestral Home from ProfileStudios on Vimeo.

Canon Neill himself is a very keen reader, blogger and writer, contributing opinion pieces on his website and on local and national newspapers. Previously Curate Assistant in Monkstown, Dublin and in Limerick City Parish, he is a committed ecumenist, believing that the future of our Churches is in gaining closer bonds between all Christians of all traditions, while at the same time discovering where God is at work outside the walls of churches.

Rev Ruth Gill, latter who is already familiar with the Cloughjordan & Borrisokane Group of parishes will now serve as interim Priest-In-Charge for the time being.

“As I write these notes I am conscious that there is still an occasion to come when I will have a chance to say a formal farewell to you my friends in this group of parishes. But for those of you who may not be able to be present may I thank you on behalf of myself, Nicola & Aaron, for the warmth and generosity you have shown us since our arrival in August 1998. It has been a privilege to be your rector and fellow companion on the journey of life. We will always consider this place very special and it is you the parishioners who have made our time here a happy one. We leave with good memories and not a little sadness. May God bless each and every one of you as you have blessed us.”

Moneygall Development Association made a presentation last Monday night in Ollie’s Bar to acknowledge Canon Neill’s contribution to their community; described him as being selfless and having strengthened bonds between faiths which will remain a lasting legacy. Using President Obama’s quote, “We did not come to fear the future. We came here to shape it” the association whole heartedly agreed that Canon Neill’s presence in their community had definitely shaped a brighter future for the area.

North Tipperary’s loss is most definitely a gain for the Dioceses of Dublin and Glendalough and so we wish Canon Stephen every success in his new journey and in the words of the old Irish Toast; “May you have warm words on a cool evening, a full moon on a dark night, and a smooth road all the way to your door.”