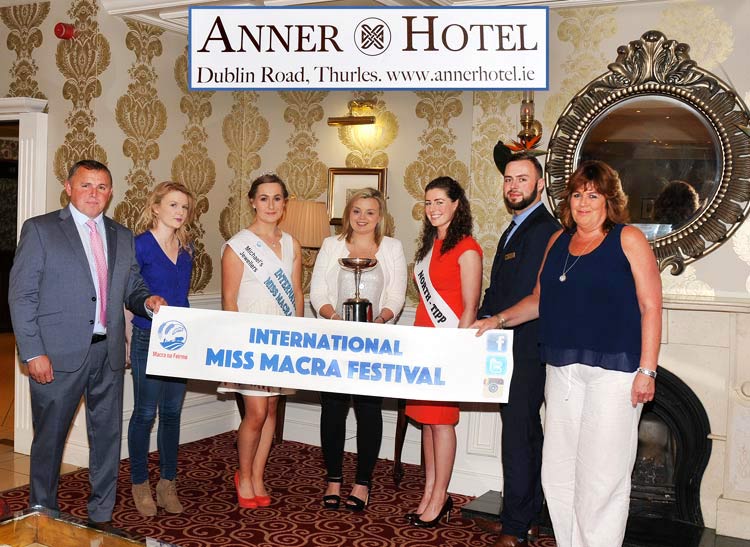 Clonoulty-Rossmore Macra na Feirme are delighted to confirm that this year’s International Miss Macra Festival will take place over the 2016 August Bank Holiday weekend, from Friday the 29th of July to Monday the 1st August, here in Thurles, Co. Tipperary. This will be the Festivals 45th year and is an exceptional representation of what just one farming organisation can achieve; through hard work, determination and the full support of its local community.

This year will once again see young ladies travelling from all over Ireland, in the hope of following in the footsteps of last year’s winner, Miss Susan Willis (Co. Carlow); in being crowned International Miss Macra 2016. This, as stated, 45th year of the festival, will see many new initiatives and a change of scene, but first a brief history lesson.

International Miss Macra Festival History
The International Miss Macra Festival is a personality competition, a mini Rose of Tralee, if you will, for Macra na Feirme Clubs and their members. The festival was founded by Mr Paddy Heffernan, Mr Tom Horan and Mr Michael Slattery back in 1971. Initially Macra Members were met with little enthusiasm from Macra National Headquarters, but the Clonoulty / Rossmore club did not allow this to deter their ingenuity. As a rural farmers organisation they ploughed on (pardon the pun), regardless, with their plans and year on year since its conception this festival has blossomed with as many as 32 contestants competing annually each year, from Ireland and abroad.

The 90’s saw an interest from rural youth and agricultural organisations abroad, e.g. 4H clubs in America and Scottish Young Farmers, begin to develop. The International Miss Macra Festival is somewhat unique in that it is run by the same local Macra Club every year; rather than a County Executive and their scale of success is a testament to both the dedication of the Clonoulty-Rossmore Macra members and the massive support of the local Tipperary community.

The local Clonoulty / Rossmore community, in particular, play a most important part in this festival, with households taking on the role as ‘Host Families’ for each of the contestants, year after year. This tradition remains very strong; seeing the contestants receive the warmest of welcomes, as they become adopted into the hearts of the local host families. To these ‘Host Families’ go our committee’s gratitude for their never ending support, generosity, overall commitment and loyalty, each year.

International Miss Macra Festival Returns to its Roots
This year, 2016, sees the festival returning to its initial roots; coming back to Thurles, Co. Tipperary for the full duration of the weekend. Such is the high calibre of the venues in Thurles that the Festival this year will take place in three separate areas, as we showcase the best that Thurles and Co. Tipperary has to offer: Hayes Hotel (Birthplace of the GAA), on the Friday night, The Dome on Saturday and the magnificent family-run Anner Hotel (Graded Four-Star by Fáilte Ireland), on Sunday night.

This year, the festival will kick-start on Friday the 31st of July when contestants will meet the festival committee in Clonoulty village. Friday afternoon also offers contestants a chance to take a personal tour of the world famous Coolmore Stud Farm, followed by lunch in the Anner Hotel restaurant. Next the contestants will take part in a Zumba class in Clonoulty Community Hall where contestants, host families and local people will get their chance to ‘meet and greet’; a long-standing tradition of this festival.

International Miss Macra Judges
The judges for the 2016 competition this year are:-
(A) Joan Pollard Carew, representing Michael Carew Jewellers, Friar Street, Thurles. Joan, whose husband is main sponsor of the festival, is herself a published poetess and well known nationally in Irish Art and Irish Dancing circles. Joan and her husband also contribute greatly to the festival in terms of invaluable support, time and advice.
(B) Geraldine Henchion, representing Tipp FM, Tipperary’s No 1 Local Radio Station. Geraldine also well known in Art Circles, joins the panel for the first time this year.
(C) Declan Ryan, who has held every known post of responsibility on the International Miss Macra Festival committee and also currently holds the title of President of the Clonoulty/Rossmore Macra club.

The Friday night will comprise of a ‘Themed 90’s Disco’ which allows the contestants to let their hair down, or to match this year’s theme; so grab your cloth headbands, back-comb that hair up, and dress in your 90’s best, before joining us in the historic Hayes Hotel, Thurles, for this most enjoyable of events. Doors will open at 10.00pm sharp with further full details on tickets to be released shortly.

Saturday morning heralds an intense day for the contestants, as they must rise early and each prepare for their private interviews in front of the aforementioned 3 person judging panel. This panel are given the difficult task of selecting just one girl from all the many contestants; the winner to be crowned “International Miss Macra 2016”.

On Saturday evening it’s back to the Dome, Semple Stadium, Thurles for the Cabaret, where the contestants will be interviewed on stage two at a time by interviewer Mr Mike Egan, himself a previous Macra member and a long-term friend of the festival. This year the interviews will be followed by live music from ‘Switch’ to which the contestants, their supporters and all those attending, can dance the night away.

Sunday morning starts with the contestants attending Mass at Clonoulty Parish Church. The choir accompanying this ceremony is comprised annually of members of Clonoulty Rossmore Macra and members of the local community. Following Mass, the contestants then take part in a family fun field day, in the Clonoulty G.A.A grounds. This enjoyable event is a mixture between a Macra Field Day and a School Sports Day. Here the contestants will have to show their worth by participating in many country inspired activities. All this will be followed by a barbecue, weather permitting.

Immediately after the Sports Day the preparations for the Miss Macra Gala Ball will commence. To ensure that each of the contestant and committee members are looking their best, there will be a beauticians and hairdressers, (Tara Murphy and Elaine O’Meara), on hand and on site.

Sunday night is the International Miss Macra Gala Banquet in the Anner Hotel; latter the highlight of the Festival. To begin all the contestants plus their escorts are photographed, before the champagne reception at 6.00pm. The contestants, their handsome escorts, the invaluable host-families, and various supporters and Macra and non-Macra members will all sit down to enjoy a delicious five course meal. The meal will be followed by various speeches, live music and dancing. At the enchanting hour of 12.00 midnight, silence will descend on the Anner ballroom as anticipation reaches climax point; when the winner of the 2016 International Miss Macra Festival will be crowned. As the festival now draws to a close, the entire Ballroom, filled with Macra and non-Macra members will dance the night away well into the early hours of Monday morning.

This event is sure to be yet another International Miss Macra festival to remember for all who make the Trip to Thurles, Co. Tipperary for this upcoming August Bank Holiday weekend. The committee of International Miss Macra look forward to seeing you all there and are more than willing and ready to give you a true taste of Tipperary hospitality and a weekend you will truly never forget.

So if we have left you wanting to know more, find us on Facebook on Twitter or check out the Miss Macra Website http://missmacra.weebly.com/ for all the latest info.

If you require any further details regarding what is guaranteed to be an unforgettable weekend or if you have any questions; you can contact Ann Marie Lyng (Festival Chairperson), on Mobile (087)1339602. So don’t delay, book your weekend ticket, pack your dancing shoes and hit the road to Thurles, in Co. Tipperary, this August Bank Holiday weekend – its not a long way.

This entry was posted in County News, Festivals, Tourism. Bookmark the permalink.